Due to the overwhelming success of the Black Panther movie and because Marvel recently announced that they have moved up the release of Avengers Infinity War to April 27th (our launch date), we have decided to push back the launch date of our crowdfunding campaign. It is believed that much of Avengers Infinity War takes place in Wakanda and we acknowledge that nothing else will be happening on April 27th. Our new launch date is May 25th, 2018. This means you have more time to sign up early and grab the early bird bonuses. Thanks to all those who have already signed up. Mark the date and spread the word. Are you excited about the Celflux Animated Short?

What a ride this Celflux journey has been. Those who have been with us from the beginning know that it’s a labour of love. The late nights, the sacrifices, all worth it because we are passionate about this little project of ours. It’s hard to believe that it’s been four years since we started working on issue number one. We’ve learned a lot and our little project has grown quite a bit. Today, we are three issues down and also working on an animated short. So we believe the time has come for us to take a leap of faith to the next step of our journey.

As you guys know Celflux is a totally independent project by Dixie Ann and I. For three years it’s been a team of two. Everything you see in the pages of Celflux was put together by just us two. Both of us write the story and I’m responsible for all the visuals. When we decided to work on the animated short it was the same. We both came up with the story and I taught myself how to animate to deliver the visuals. At this point, we needed some help. We needed to bring our characters to life by giving them voices. We were extremely lucky to find an awesome group of voice actors who came on board and lent their voices to our characters. Our team went from two to fifteen. This included a talented musician who also came on board to give the short an original score. We are totally indebted to them all because each person that came on board did so because they saw our vision and fell in love with Celflux. They all lent of their time, talent, energy and equipment to help us make the short a reality. We’ve released our first trailer check it out below:

Ever since day one we’ve have avoided crowdfunding. There are a few reasons for this.

Firstly, as we said Celflux has been a labour of love. Making money from it has never been our motivation. Those who follow us on social media know that we don’t push sales because it’s not our priority. Anyone who is passionate about what they are creating can identify with this. You just want to create and you find a way to do it. You don’t concentrate on monetizing it. Many might say that’s not a good thing. They might be right, but it’s the reality. Don’t get me wrong money has its place. However, historically, the desire to make money has never been a good motivator for anything. We’ve got enough of that in the world.

Secondly, Crowdfunding is somewhat of a litmus test to determine who are your real supporters. Most projects have a lot of followers, but you are not sure how many of those are loyal fans. Crowdfunding helps give you a clear picture, really quickly, about how much real support you have. Not too long ago I was introduced to the 1% rule of internet culture. It’s the philosophy that states that 90% of the participants of any internet community only view content (they are called lurkers), 9% of the participants actually participate by commenting, liking, sharing etc., and 1% of the participants are actually invested, emotionally and otherwise, in seeing you succeed. I’ve seen quite a few crowdfunding campaigns fail that had large numbers following them. Large following numbers does not necessarily translate to a large amount of support. So we’ve stayed away from crowdfunding because we really did not know if we had enough real support. But I guess the only way to know is to make that leap.

Thirdly, fear of failure. This is basic. No one wants to fail. No one wants to be seen failing. But most can tell you that if you never try, you will never know. Better to try and fail, than to fail to try.

Fourthly, not having a good enough track record. When we started out in 2013 we came out of nowhere. Nobody knew us from Adam. We were just a couple working on a book. Who would support newcomers and strangers? Not many folks would. So we had to take the time and build the awareness of the Celflux brand so to speak. Make people aware of Okira and her team. Let people get to know about the project and the folks behind it. While Celflux is far from being a household name, we believe that Celflux is a lot more known now than when we first started. People can also see that we’re dedicated to this project for the long haul otherwise we would have let it go a long time ago. Folks can see our progress and are aware of the quality of the characters and project as a whole.

So these are the reasons we’ve avoided crowdfunding in the past. Today we are overcoming all those fears and taking Celflux to the next step. We’re talking the Celflux Animated Short to Indiegogo. 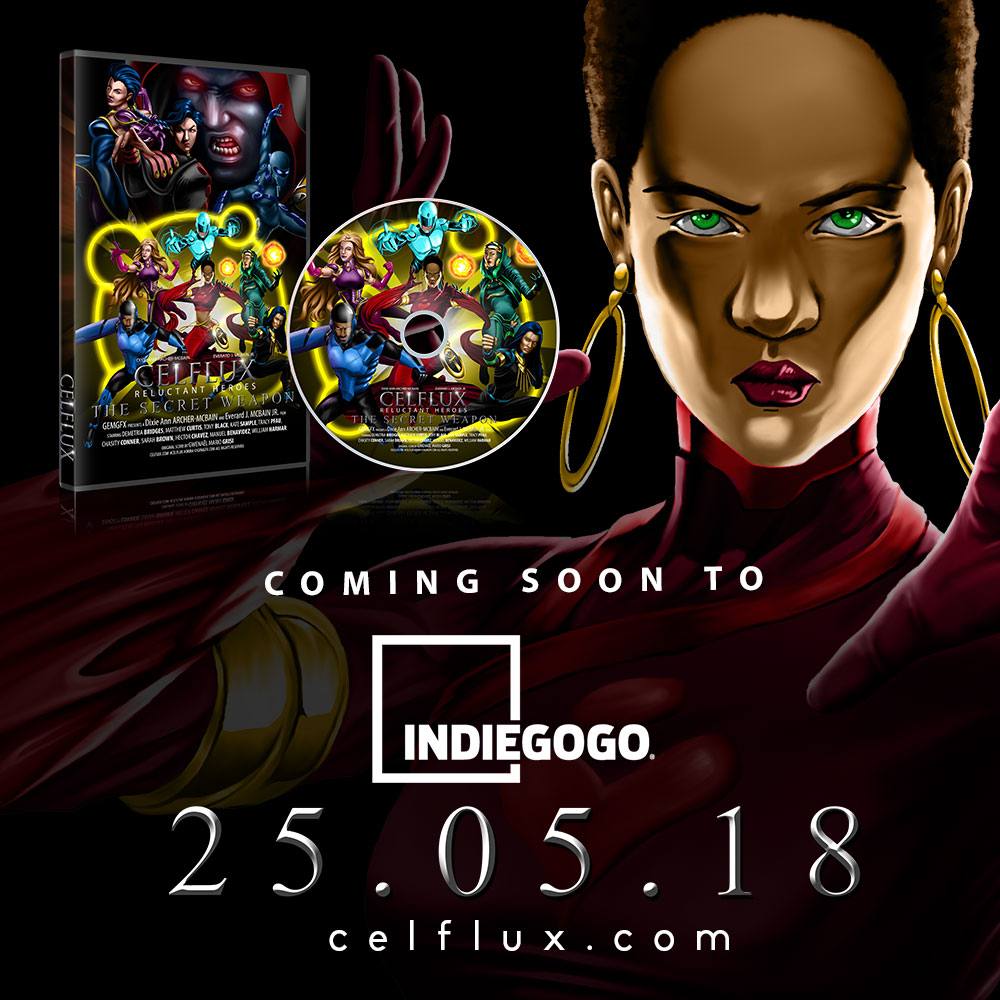 Sign up and see the first of three chapters for FREE!

The Celflux Animated Short will be one hour long. It will be made up of three twenty minute chapters/episodes. The episode titles are; I. Assault II. Alone III. Awakened.

We will be releasing the first twenty-minute chapter “Assault” on 25.05.18. At the same time, we will be launching our first ever crowdfunding campaign on Indiegogo. Everyone who signs up early will get to see the first chapter for free. You can sign up on our Indiegogo pre-launch page.

Sign up and see the first of three chapters for FREE!

For our crowdfunding campaign, we’ll be offering all three chapters on one DVD or digital download along with lots of other perks. We’ve got comics, posters and more. We’ll be giving more details in the coming weeks. Help us spread the word by sharing the news with your friends. With your help, we’ll be able to make the Celflux project a success. Thanks to all who have supported Celflux thus far and we’re looking forward to great things in the future.