When I was little I would hurry home after school because I knew that one of my favourite shows would be coming on at a certain time and I didn’t want to miss a minute of it. I would get home and take up my position in front of the television and it was understood that for the next 30 minutes I was not to be disturbed. When the show started the screen would go completely red and then the symbol of a cat would appear. I would lose my mind. That show was Thundercats (1985). This wasn’t my first experience with cartoons and animation. Oh no. This had been my pattern of behaviour for a very long time and still is up till today.

I first started sitting in front of the television as early as the age of five. Jonny Quest (1964 ), Birdman (1967), The Herculoids (1968), Space Ghost (1968) and, Thundarr The Barbarian (1980) were some of my early introductions to cartoons. I fell in love with animation immediately. I loved seeing these characters with superpowers in action and I remember thinking to myself, even way back then, “Boy I wish I could do that someday.” 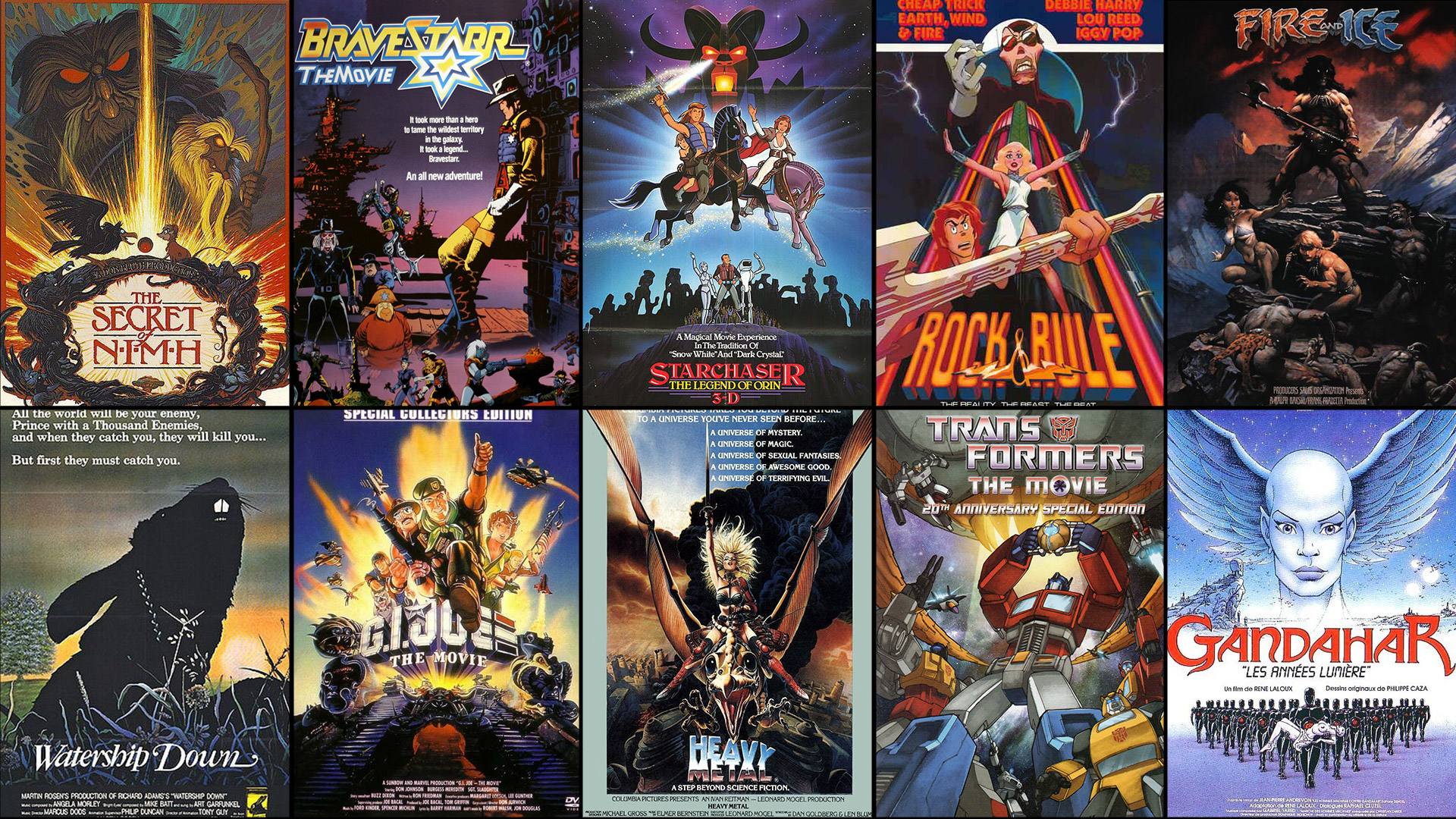 Just a few of the classic sci-fi and fantasy animated movies that I came across in the 1980s.

When Dixie Ann and I decided to create Celflux I wanted to create a trailer to help promote the book. The first one that I did was similar to a motion comic. Have a look at it here.

It was cool and got the job done. I simply used the images from the comic itself and put them in the video. At the end of the trailer, I did my first animated footage and it was of Samantha doing a flyby. I realised then that the next trailer that I did had to have more than just the motion comic.

When you have a burning desire to create, you find a way to make it happen.

I started this post talking about Thundercats. The reality is I’ve always loved 80s cartoon intros. Bionic Six, Thundercats, Silver Hawks, Visionaries, you name it. I loved the action and energy demonstrated during those intros. Have a look at this Visionaries Knights of the Magical Light intro.

So I wanted to do a trailer for Celflux with an 80s cartoon tribute feel to it. I didn’t have the skill or know-how though, so I decided to approach some animation studios to get some quotations. I got quotations of $20K and 30K for a 30-second intro. Astronomical and rightly so. Make no mistake animation is a very difficult, tedious and technical process. So I couldn’t be angry with anyone who charges those prices for their animation work. It is well deserved. I, however, did not have that kind of money. So what was I to do? I thought to myself “Perhaps crowdfunding?”. Crowdfunding is a strange creature and is not for everyone. Many people see the success of certain crowdfunding campaigns and think that it’s easy to do. We have a saying in Trinidad. “Gopaul luck, ain’t Seepaul luck.’ It means what one person will get away with, another person will not be so lucky. Therefore, we decided against that. So we didn’t have the money and couldn’t raise it. Most folks would give up on the idea at this point. But my fellow indie creators can bear witness that we don’t give up that easily. When you have a burning desire to create, you find a way to make it happen. I thought about that little boy sitting in front of the television all those years ago hoping that he would someday animate something and realised, that little boy’s time had come. I was going to teach myself how to animate, and I was going to attempt to animate the 30-second trailer myself.

Is it Possible To Animate Alone?

This is a question I had to ask myself. As I said earlier, animation is a very difficult, tedious and technical process. Hence the reason there are usually teams of people working on any given animated project. So I had to find out if it was possible for one person to do it all by themselves. I was happy to discover that the answer was a resounding YES! I found that there are hundreds of talented animators out there creating masterpieces all by themselves. The advances in technology and the availability of software has made high-quality animation possible for the single creator. There are several case studies, but the one that stands out to me was the story of Makoto Shinkai. 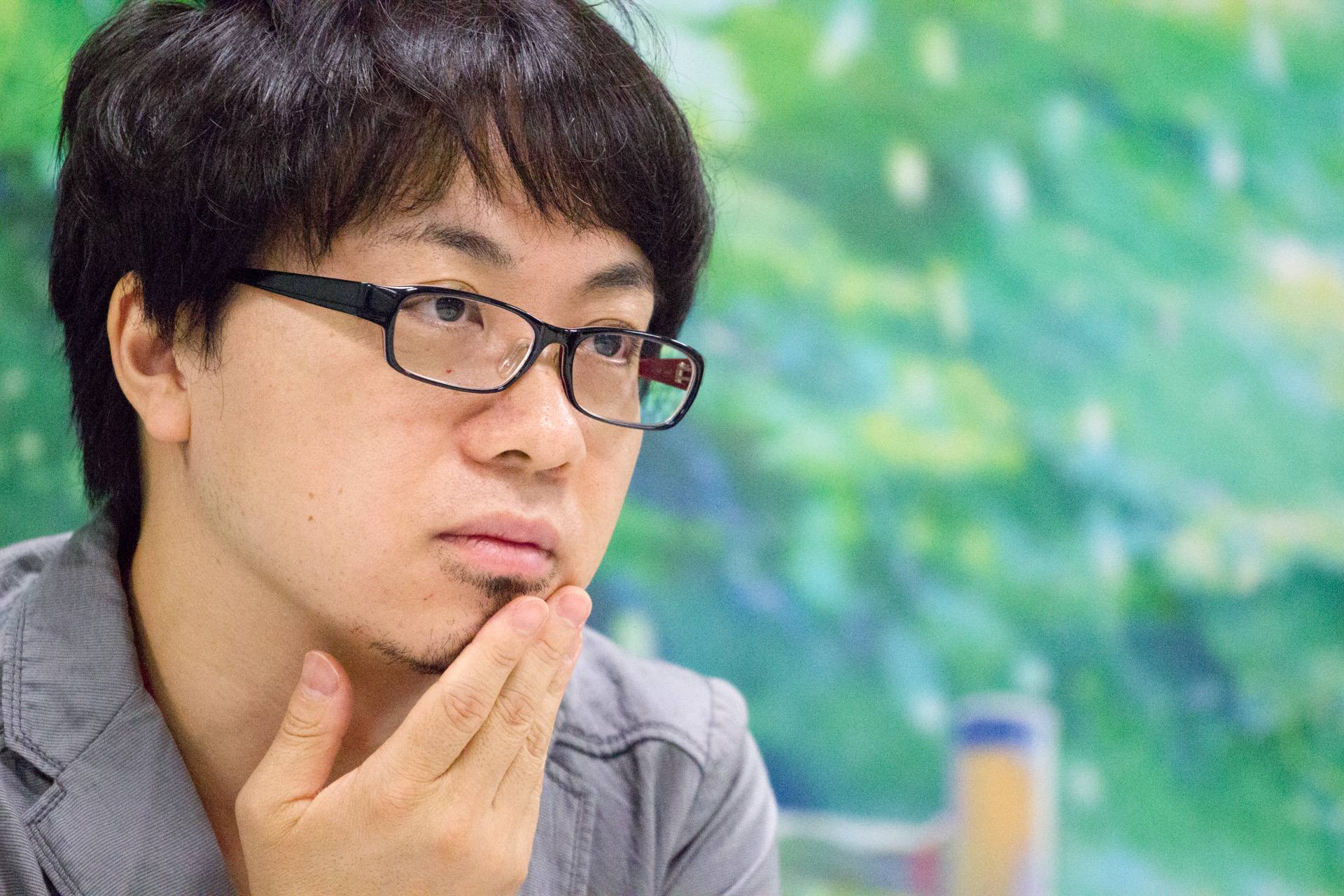 Makoto Shinkai born as Makoto Niitsu, is a Japanese director, writer, producer, animator, editor, cinematographer, voice actor, manga artist and former graphic designer. The story is told that in May 2001, Makoto quit his job at a video game company and began to work on a film called Voices of a Distant Star. As he would later say in an interview, the 20-minute film took about seven months of “real work”. The film went on to be critically acclaimed and is talked about even to this day. The work on Voices is fantastic and one is hard-pressed to believe it was all done by one person. But it was. So it was possible. I decided then to apply myself. Look at tutorials on YouTube. Learn about the animation process, frame rates, cinematography, lighting, film editing and so on. It was a learning process but I put my best foot forward. The result was the first Celflux Animated Trailer. It had a lot of room for improvement, but I was happy with it. So we put it online and set it loose. It racked up about 14K views (on Facebook) in a relatively short period of time. By no means viral, but it encouraged us that we did something worth watching.

Many folks saw the first Celflux trailer and gave us some great feedback. One of the individuals was Ms Camille Selvon Abrahams. She is the owner of Full Circle Animation Studios and the head organiser of an event called Animae Caribe that takes place annually here in Trinidad and Tobago. She saw the trailer online and extended an invitation to us to be guests at Animae Caribe. We’re eternally grateful to her for this because she gave us an opportunity to introduce Celflux to a local audience. The response to Celflux was fantastic. Our books and t-shirts sold out and everyone has some really encouraging words for us about our animated trailer. Because of the positive response to the first trailer at Animae Caribe and online, I asked Dixie Ann if she thought we should try to do an animated short film. Dixie Ann is always encouraging and convinced me that I could do it. So I again decided to do more research into the process of creating an animated short. This was going to be more involved than the first trailer. This was going to have a story, and actors, and lots of other cool stuff. So I got to work on the planning. The first thing I did was write a script. I had to learn how to do this as well. Scriptwriting is a skill. Much respect to those who do it for a living. With a few drafts and much trial and error, I was able to complete a stand-alone story featuring the characters of Celflux. The second thing I needed was voice actors. I found the Voice Acting Club and I put out a call for people willing to collaborate on the Celflux Animated Short project. To our surprise, we got quite a few responses from folks wanting to be a part of it. All of them very talented. We eventually settled on a group that we believe are not only the most talented, but the most decent, helpful and genuine individuals you would ever hope to meet. We are lucky to have them on board. 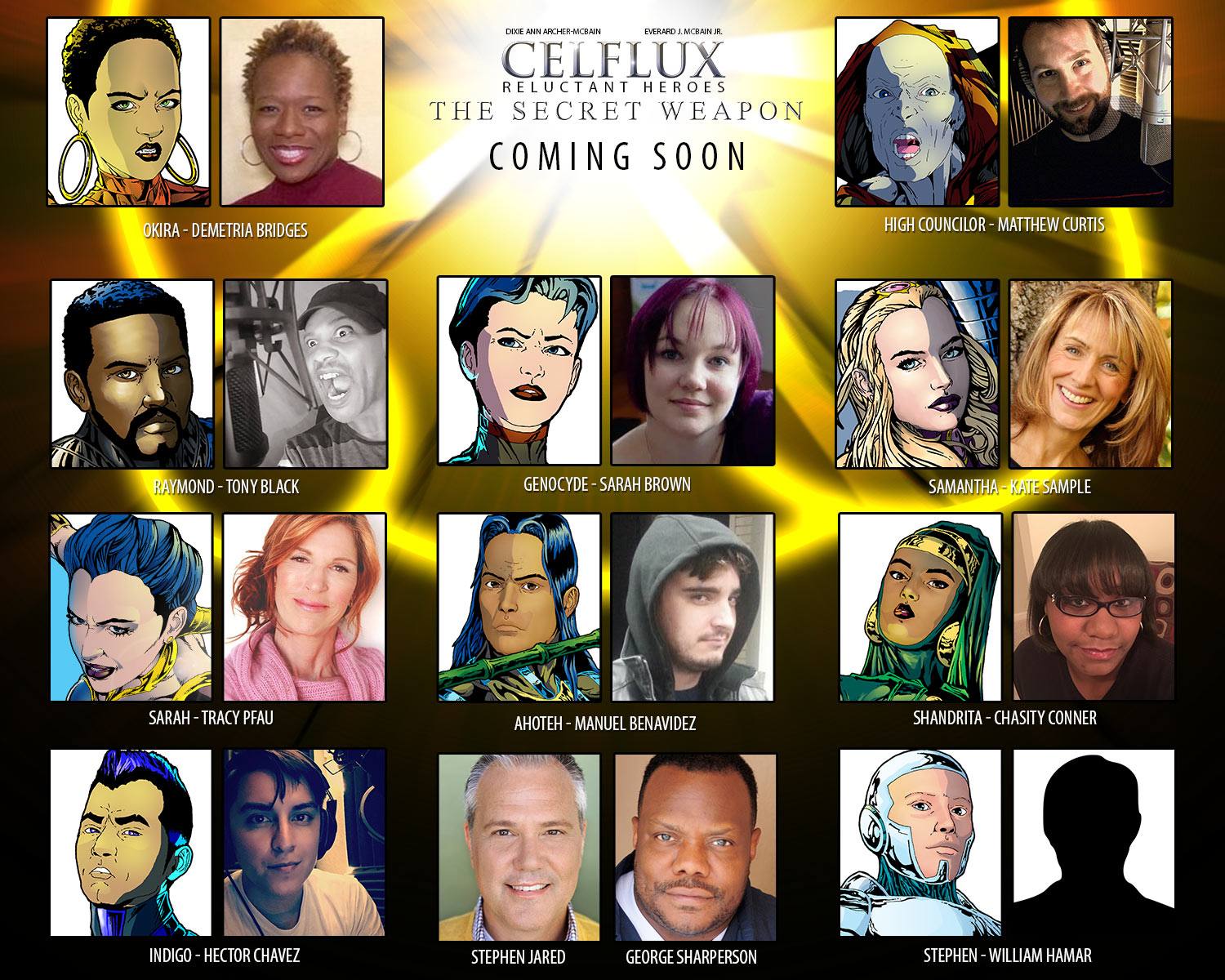 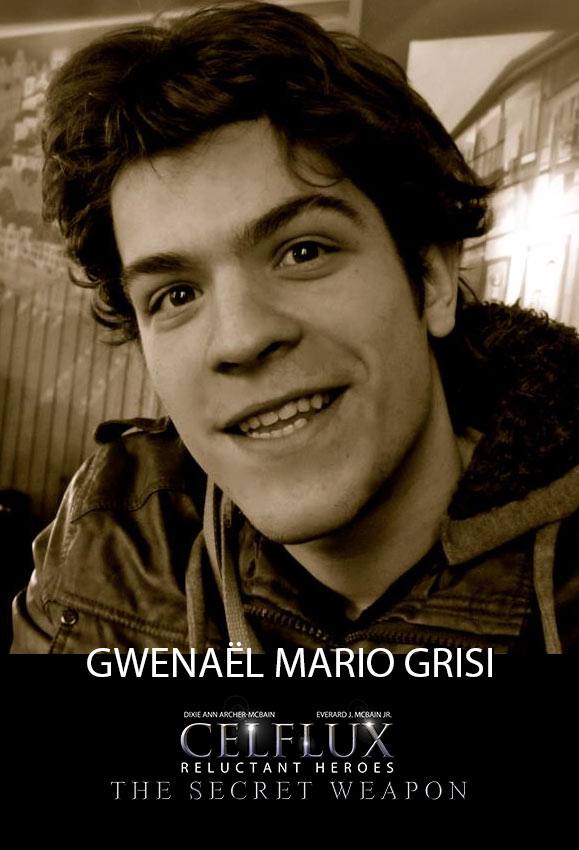 Gwenaël Mario Grisi the talented musician from Brussels came on board to create an original musical score for Celflux.

We want to thank Kate Sample as she was the one who brought on board Demetria Bridges who is the voice of our leading lady Okira. We also want to say thanks to Matthew Curtis as he was the one who brought on board Gwenaël Mario Grisi who would become our talented musical composer. We also want to thank Tracy Pfau who was responsible for bringing on board her husband Stephen Jared and her good friend George Sharperson. I sent them the script, and they all recorded their lines and sent them back to me. We were going to do this. For no other reason than it’s something, we wanted to do. I then had everything I needed to begin working on the next thing. A trailer.

Like the first trailer, I had new things to learn. I needed to learn sound editing. How to match up the sound effects with the action. How to synchronise the character’s mouth movements with the voices and so on. So once again there was a learning curve. But I was following in the footsteps of all the other talented independent animators that had gone before me so it could be done. After about 5 months of work, I was able to complete and release the first trailer for the Celflux Animated Short. Have a look at the trailer here:

In April of this year, after some encouragement from one of the voice actors Tony Black, we submitted a proposal to CreativeTT. There was an open call for individual filmmakers to receive grants for film projects. The Trinidad and Tobago Creative Industries Company Limited (CreativeTT) is a wholly-owned State enterprise established by The Government of the Republic of Trinidad and Tobago through the Ministry of Trade and Industry. CreativeTT’s mandate is to stimulate and facilitate the business development and export activities of the Creative Industries in Trinidad and Tobago to generate national wealth and, as such, the company is responsible for the strategic and business development of the three (3) niche areas and subsectors under its purview- Music, Film, Fashion. In May, we received an email from CreativeTT that told us the Celflux project was selected to receive a grant for Marketing and Distribution. We can’t really talk about our plans yet, but suffice to say we are seeking to take Celflux to the next level. You can find the official announcement by CreativeTT here.

So that’s the story of how the Celflux Animated Short came to be. We began working on Celflux the graphic novel in 2013, and had no idea where it would take us. Now four years later, we’re working on an animated short with a great group of voice actors and a state investor behind us. If you had told us that in 2013, we would never have believed you. I’d like to encourage my fellow independent creators out there to live that independent spirit. Follow your creative heart and do what is necessary to bring your creations into reality. Don’t let the pursuit of fame or money cloud your vision. Don’t let anything hinder your creativity. In the immortal words of Shia LaBeouf “Just do it!” You never know where your journey will take you.

Till next time. All the best.