In the early 1980s I started reading comic books. Well I’ve always been reading them, but in the early 80s I started reading them with a passion. I’m going to talk about those later, but today I’m only making reference to that to highlight how I was introduced to this next inspiration. In the very back of a comic book I read was a poster for what someone explained to me was a new cartoon series that was available in the US, and had not come to Trinidad and Tobago yet. This poster was like nothing I had ever seen before and I was positively hooked from the moment I saw it. Earlier on many of the cartoons we spoke about were created by the Hanna/Barbera team. Today we’re going to talk about something that was produced by another team. The team was Rakin/Bass, and the cartoon was Thundercats.

(from Wikipedia)
“ThunderCats is an American animated television series that was produced by Rankin/Bass Productions (the same that created the SilverHawks, TigerSharks, and The Comic Strip) debuting in 1985, based on the characters created by Tobin “Ted” Wolf. The series, for which Leonard Starr was the head writer, follows the adventures of a group of catlike humanoid aliens. The animation for the episodes was provided by the Japanese studio Pacific Animation Corporation, later acquired in 1989 to form Walt Disney Animation Japan. Season 1 of the show aired in 1985 (65 episodes), followed by a TV movie entitled ThunderCats – HO! in 1986. Seasons 2, 3, and 4 followed a new format of twenty episodes each, starting with a five-part story. 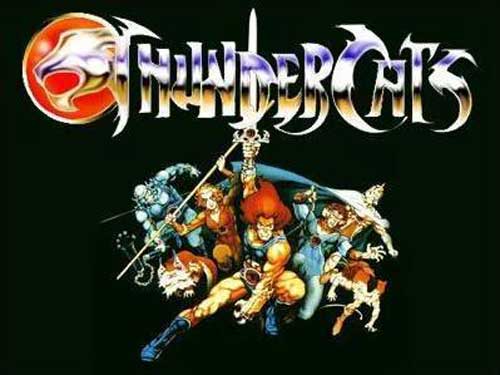 This was the ThunderCats poster that introduced me to this awesome show.

ThunderCats follows the adventures of the eponymous team of heroes, catlike humanoid aliens on a planet called Third Earth. The series plot begins with the dying planet Thundera [thun•DAIR•uh] meeting its end, forcing the ThunderCats (a sort of Thunderean nobility) to flee their homeworld. The fleet is attacked by the Thundereans’ enemies, the Mutants of Plun-Darr, who destroy most of the starships in the “ThunderFleet,” but spare the flagship hoping to capture the legendary mystic Sword of Omens they believe is on board. The sword holds the Eye of Thundera, the source of the ThunderCats’ power, which is embedded in the hilt. Though the Mutants damage the flagship, the power of the Eye drives them back. The damage to the ship means the journey to their original destination is not possible, instead having to journey to “Third Earth”; which will take much longer than they had anticipated. The eldest of the ThunderCats, Jaga, volunteers to pilot the ship while the others sleep in capsules; however, he dies of old age in the process, but not before ensuring they will reach their destination safely. The flagship contains the young Lord of the ThunderCats, Lion-O, as well as the ThunderCats Cheetara, Panthro, Tygra, WilyKit and WilyKat, and Snarf.

When the ThunderCats awake from their suspended animation on Third Earth, Lion-O discovers that his suspension capsule has slowed, rather than stopped, his aging, and he is now a child in the body of an adult. Together, the ThunderCats and the friendly natives of Third Earth construct the “Cat’s Lair,” their new home and headquarters, but before long, the Mutants have tracked them down to Third Earth. The intrusion of these two alien races upon the world does not go unnoticed, however, as a demonic, mummified sorcerer calling himself Mumm-Ra recruits the Mutants to aid him in his campaign to acquire the Eye of Thundera and destroy the ThunderCats so that his evil may continue to hold sway over Third Earth.”

Thundercats had a huge influence on me as a creator of comics. The group dynamic, the fantasy world of Third Earth. The technology. The magic. Mumra The Ever Living. “Sword of Omens. Give me sight, beyond sight.” Oh boy the show was the ultimate. The Thundertank. Each of them having their own special ability and weapon. I actually got ThunderCats on VHS before the series came to Trinidad. Looking back at it now, much of the dialogue seems corny and recited, but back then it was the best thing on TV. The logo was iconic. Up to this day it still works. It’s intro is still one of the best even to this day and can rival many modern cartoon intros. The theme song. Don’t get me started on the theme song. You can still sing it can’t you? Of course you can. It was that good. Here’s the intro again just to enjoy.

Here’s a comic con panel with the original voice actors of ThuderCats.

Brief history of the ThunderCats by Mask & Cape.

Here’s the intro for the 2011 version of Thundercats. My personal opinion was that the original intro was so good it could not be topped so they decided not to even do an intro for the new version.

I loved and still love the ThunderCats and it was a great influence on me as a creator. What were some of your early inspirations? Till next time.