So we’re continuing today with a look at the things that influenced me in my early childhood to start drawing and creating characters and worlds and all the cool stuff. We’ve already looked at The Herculoids, Thundarr The Barbarian and Birdman. Today we’re going to look at another pioneer in Saturday morning cartoon frontier. Another creation of the great Alex Toth, and one of the successful superhero cartoons that came out of the Hanna Barbera Studios. A show that really paved the way for other sci-fi oriented projects. Today we look at Space Ghost.

Now a few might be inclined to think that Space Ghost is not an old cartoon. Mainly because of the fact that the character has been re-introduced to the world on more than one occasion. In particular with a hugely popular late night talk show called Space Ghost Coast to Coast on Cartoon Network and Adult Swim. For me though I was introduced to this character in the late 1970s and it was awesome.

(from Wikipedia)
“Space Ghost is a fictional character created by Hanna-Barbera Productions and designed by Alex Toth for CBS in the 1960s.[1] In his original incarnation, he was a superhero who, with his sidekick teen helpers Jan, Jace, and Blip the monkey, fought supervillains in outer space. In the 1990s, the character was brought back as a host for his own fictional late-night talk show, Space Ghost Coast to Coast, on Cartoon Network and Adult Swim. In the 2000s, he was revamped as a serious superhero once again in a mini-series by DC Comics. 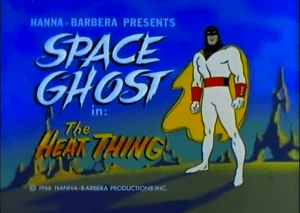 Space Ghost is an animated television series produced by Hanna-Barbera Productions. It first aired on CBS from September 10, 1966, to September 7, 1968. The series was composed of two unrelated segments, Space Ghost and Dino Boy in the Lost Valley. An alternative title, Space Ghost and Dino Boy, is used in official records to differentiate it from Cartoon Network’s late-night talk show Space Ghost Coast to Coast. The series was created by Alex Toth[1] and produced and directed by William Hanna and Joseph Barbera.

Space Ghost, along with teenaged sidekicks Jan and Jace and their monkey Blip, fight villains in outer space. Usually Space Ghost’s sidekicks would get captured or trapped by the villains and Space Ghost would have to defeat the villains and save the day. His enemies included Zorak, Brak and his brother Sisto, Creature King, Black Widow (aka Spider Woman), Lokar, Moltar, and Metallus.” 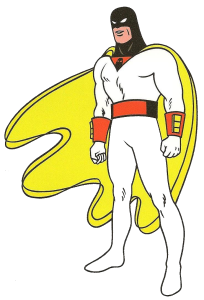 Space Ghost was the ultimate. The guy had a belt that gave him the power of invisibility. This was a fantastic thought to a young boy. He had power bracelets that gave him a range of energy powers. He could fly. He had enhanced agility and super strength. He had a protective force field. The list goes on. This character introduced me to power through gadgets and technology. As a young boy you didn’t really care how it worked, you just knew that this character had a device that gave them special or enhanced abilities. Of course you started wishing you had the gadgets, as well as thinking of gadgets you could come up with. Watching this show you realized that no matter what difficulty Space ghost found himself in, there was something his gadgets could do that would get him out of it. Last but not least, the character had a really, really cool costume.

Here’s the original intro to Space Ghost from 1966.

So this was another one of the greats from my early years. This was one of the characters I was scolded for drawing in my school exercise books. and I can see now how it has influenced my creativity. What are your early inspirations?