For some of our younger readers, these early inspirations may seem ancient and a bit corny, and they just might be. However, I believe one can still appreciate the enormous level of creativity demonstrated in these early works and recognize that they were the pioneers of much of what we look at today. Also, as is the case with me, they are responsible for lighting that spark of creativity that got us heading down the road of imagination. Today we’re going to look at another one of my early inspirations. I remember looking at this as a child and being being captivated by this amazing character. Today we look at Birdman

(from Wikipedia)
“Birdman and the Galaxy Trio is an animated science fiction television series created by Alex Toth and produced by Hanna-Barbera. It debuted on NBC on September 9, 1967,[2] and ran on Saturday mornings until September 6, 1969. The program consists of two segments: Birdman, depicting the adventures of a winged superhero powered by the sun, and The Galaxy Trio, centering around the exploits of three extraterrestrial superheroes. NBC ran two new segments of Birdman each Saturday, separated by a segment of The Galaxy Trio.

The character of Birdman was revived three decades later in the Cartoon Network/Adult Swim TV series Harvey Birdman, Attorney at Law, and several characters from Birdman and the Galaxy Trio appeared in this revival.” 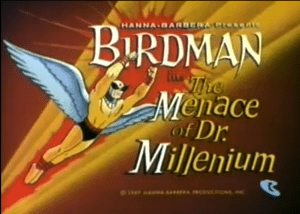 You may have noticed by now that I’ve been mentioning works created by Alex Toth (June 25, 1928 – May 27, 2006). This was one of his creations. The other that we have mentioned so far was The Herculoids. When I first saw Birdman, the thing that caught me was that he swooped down from the sky and shouted his name in this all powerful booming voice. “Birrrdddmmaaaannn!” I was like “Wow!” That voice came from veteran performer Keith Andes. Keith Andes (July 12, 1920 – November 11, 2005) was an American film, radio, musical theatre, stage and television actor.Whenever the show was on I wouldn’t miss it.

Birdman was an ordinary human who was granted special abilities by the Egyptian sun god Ra. In addition to having the ability to shoot solar rays from his fists and project “solar shields” to defend himself against attacks, he also could fly.

Birdman introduced to me the aspect of the mythical. This guy didn’t get his abilities from science but from a god. I was also introduced to the idea of super hero weaknesses. He was not invulnerable. His powers had limits. He would have to recharge his powers by absorbing rays from the sun. The cartoon also brought to me the idea of super hero responsibility. Birdman was recruited by a secret government agency to fight threats that faced humanity. I realized that those with the gift of special abilities had a noble responsibility to use them for the good of humanity.

Here’s the intro for the Birdman.

There were also a few editions to the cast which were called the Galaxy Trio. The Galaxy Trio is a group of three extraterrestrial superheroes, Vapor Man, Meteor Man, and Gravity Girl, who patrol space in their cruiser Condor One maintaining order and fighting evildoers in the name of the Galactic Patrol law enforcement agency. Here’s the intro: