Today is the last day of our Celflux Book Launch event, and I would like to finish off with a comic that was the single most influential book on me in my early years. As I’ve already said, it’s virtually impossible to name all the influences on me as a comic book creator. I don’t have enough blog posts for that. So this is just a short list. Today I’ve saved what I consider the best for last. It was a book that captivated me greatly and I was fascinated by the complexity of the characters and the story. The books name was Strikeforce Morituri.

(from Wikipedia)
“Strikeforce: Morituri is a comic book series published by Marvel Comics from 1986 to 1989. The series was created by writer Peter B. Gillis and artist Brent Anderson.

The premise is that aliens have invaded Earth and nearly succeeded in conquering it and stripping it of its resources. A scientist discovers a process which can provide humans with superhuman powers, effectively creating a group of defending superheroes. However, the process would also ensure that the empowered humans would die within a year of being empowered. The series thus focused on the heroism of the main characters in fighting the invaders, while living with the knowledge that their fates were sealed regardless of whether or not they prevailed.

The title comes from the Latin phrase “Ave Imperator, morituri te salutant” (“Hail Caesar, we who are about to die salute you”), a salute that according to popular legend (although not academically agreed) was uttered by Roman gladiators before battle in the arena. The subtitle of the comic was “We who are about to die”.

Gillis and Anderson left the series within two years. The series ended after thirty-one issues, while under the tenure of writer James Hudnall and artist Mark Bagley.

In 2069, an alien race called “the Horde” arrived in Earth’s solar system (it was later revealed that the actual name of the race was the ‘Va-Shaak’). Although they were technologically advanced far beyond humanity at that time, they were extremely savage.

Humankind’s best hope was discovered in 2072, when Dr. Kimmo Tuolema perfected the Morituri Process. This was a two-step process that allowed people with a specific type of genetic structure to have a new metabolism overlaid on top of their original one, granting them enhanced physical attributes. The second phase of the process would allow for unique superhuman powers. However, there were three mitigating factors inherent in the use of the Morituri Process:

The process was compatible with very few persons; the estimate was that fewer than 5% of all humans had a compatible physiology for metahuman conversion through the Morituri Process.
The optimal age for subjects for the Morituri Process was between 18 and 21; older subjects who underwent the process would suffer a significantly reduced lifespan than expected from optimal subjects (measurable in weeks).
The nature of the energy-based metabolism was such that, within one standard year, the human body would reject it. The rejection of the Morituri metabolism by the human body is 100% fatal. In most cases, the subject’s imminent death was indicated by massive upsurges in the subject’s power and ability levels.” 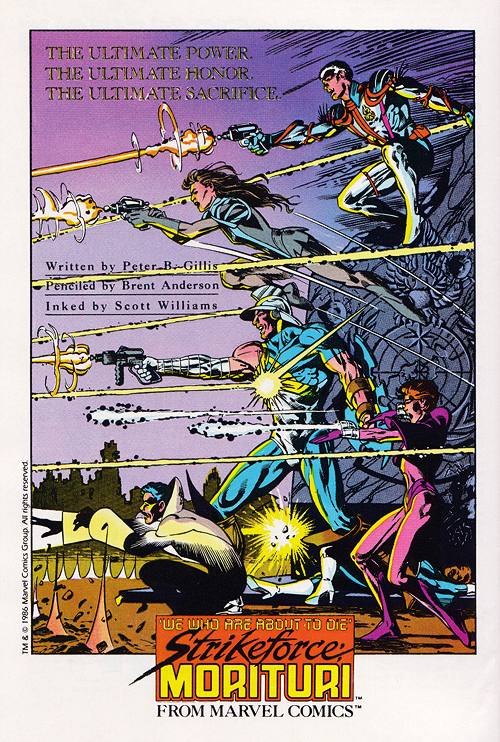 This is the poster I saw that introduced me to Strikeforce Morituri. I was hooked from that day forward.

As in the case of Thundercats I remember seeing a poster in the back of a comic book I was reading. I don’t even remember what book it was, but I remember the poster. To the top read. “The Ultimate Power, The Ultimate Honour, The Ultimate Sacrifice.” It featured six figures obviously in a battle and to the bottom just above the logo read the words. “We who are about to die.” “Wow…. What on earth is this all about?” I thought to myself. Surprisingly I forgot about it until one day I was visiting my comic book store and I saw the cover to issue No.5 and I recognized the logo and the tagline. I told the store owner. I want this, and tell me where I can find the earlier issues. 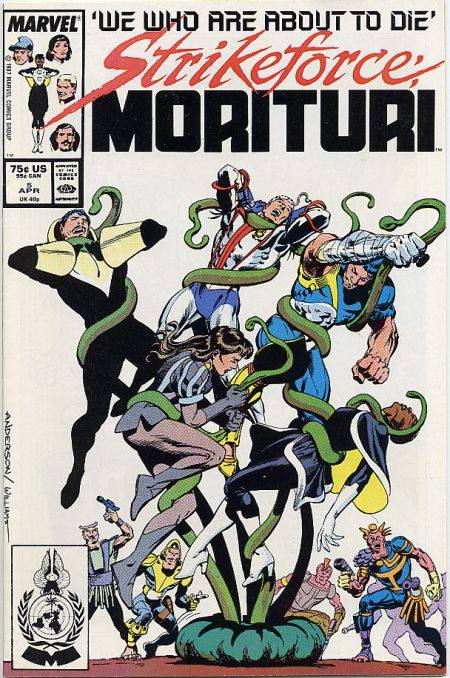 There have been books about teams before that I had read. Books about teams with special abilities that had difficulties. X-men and so on. But Strikeforce Morituri was different. Here were a group of heroes who, because the humanity was under threat, volunteered to undergo a process that they knew was going to kill them. But it was the earth’s only hope, humanity’s only light. This concept blew my mind. The book taught me that victory does not come without great sacrifice, and that in many cases the sacrifice itself is the victory because the sacrifice, though made, does not guarantee the victory. This book taught me that the real hero is not the one with the super powers, but the one who is willing to make that sacrifice. That ultimate, selfless sacrifice. The one who is willing to give up everything for nothing in return. The book showed individuals with super human abilities, but with very human personalities and emotions. Even though everyone knew their death was sure because they underwent the process, I saw heroes cry when they lost a friend and afraid when they thought about their own mortality. I saw heroes in conflict with authority that saw them as expendable. I saw heroes who showed great bravery in the face of insurmountable odds. I saw heroes demonstrate unbelievable grit even though they faced an overwhelming enemy.

Strikeforce Morituri was to me one of the greatest comics ever created. It still remains my favourite book ever, hands down.

I understand that Marvel has plans to make a live action movie in the next couple years. I hope they stick close to the original material, and even if they don’t I am glad that this book was created and I had the opportunity to read it.

So that’s it for our little trip down memory lane and the look at some of the things that inspired me as a young boy. What were your early inspirations? Look back and find what they were, and I guarantee you they will inspire you even today. I enjoyed taking this look back with you.