So as I was saying last time, there were many, many things that were an influence on me in the early years. And it is not at all possible to name them all here during this week of our Celflux Book Launch event. So this is just me singling out a few of them for honourable mention for one reason or another. We’ve so far looked at influences from the 1960s, 70s, and 80s. They were mostly Saturday morning cartoons however. Today we will look at comic books. I started seriously reading comics in the 1980s. The book we are talking about today, is the first book I actually started collecting. The book was named Justice and it was part of the Marvel (New Universe).

(from Wikipedia)
“Justice (John Roger Tensen) is a character from the New Universe imprint of Marvel Comics, the protagonist of a 32-issue comic book series of the same name published from 1986 to 1989. Most of its run was written by Peter David and penciled by Lee Weeks, though it also featured rare 1980s Marvel work from Keith Giffen. David later reintroduced Justice as a supporting character in Spider-Man 2099, a series with a very different setting. This version of the character, also known as the Net Prophet, was older and had different powers. 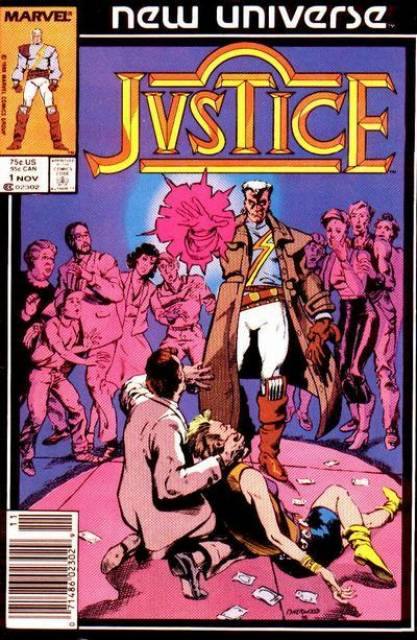 This is the artwork for Issue No.1 of Justice. This image grabbed my eye on the comic book rack, and it was love at first sight.

In 2007, the New Universe concepts were also revived, in a modified form, as a single-title ongoing series, newuniversal. A new version of John Tensen is one of the main characters featured in that series and two other characters with ‘Justice’ powers have also appeared.

Justice was a middle-aged DEA agent named John Tensen, whose wife was killed by vengeful members of organized crime. He was undercover at the time of the “White Event,” investigating Daedalus Darquill and his son Damon Conquest, who were running drugs out of their front company, Conquest Dynamics. He begins experiencing headaches as his psionic powers manifest. Eventually his cover is blown, and Darquill uses his own newfound parability to remake himself, Tensen, and the others around him into characters from a fantasy dimension, the “Far Place.” Tensen’s new identity is that of a law-enforcing knight called a “Justice Warrior”, who was having an illicit affair with Queen Endolana of the Land of Spring when he was exiled to Earth.”

The character in Justice had a very black and white sense of morality. He had the ability to read people’s auras and determine weather they were good or evil. He also executed “justice” with the power of a energy blast that came from his right hand which he called his sword. He also created a protective force field out of his left had that he called his sword. What made this book so interesting to me, was that even though the character had a very straight forward view of right and wrong and for him everything was black and white, the book was by no means straight forward. It had a lot of unexpected twists and was written in such a way that you almost did not know which world you were in at any given point in time. If it was the real world, or Tensen’s home world. You also did not know if his home world was actually real, or just something in his mind. Seriously, the book had you guessing.

This book introduced me to complexed characters. The world was shady. There were drug dealers, crime lords, and decadent lifestyles. It taught me that characters could be deep. It just wasn’t about super powers and fantastic abilities. It wasn’t about coming up with the cool looking costume. It was about characters experiencing turmoil and anguish. Having to make tough choices and experiencing great loss. It showed me that characters could reflect the human struggle. These types of characters people could identify with because they were real. Not real as in actually existing, but real as in believable. Marvel was making a push in these days to make more realistic characters and this book was a product of that.

Here’s a review of Justice by edward2962

Do you remember this comic at all, and did you read it back when it came out? What has influenced your character creation? Till next time.