I heard a story, well more of an urban legend, about Sting once. No not the wrestler, but the legendary recording artist. The guy who sang such memorable tracks as Englishman in New York. The story goes that Sting in the recording of one of his albums at his home studio, had several musicians employed working on the various tracks. When they were all done recording, Sting paid everyone for their services then, even though the album was already behind schedule, proceeded to record the music for the tracks again this time with him playing all the instruments. He plays guitar, bass guitar, mandolin, piano, harmonica, saxophone, and pan flute. The story goes that he wasn’t comfortable with how the first finished product sounded. He didn’t care that the project was behind schedule, all he cared about was being comfortable with the finished quality of his product for which he was willing to sacrifice anything. It was said that this is the attitude he approached every project with. Weather the story is true or not, it can’t be argued that Sting is a legend. I believe this attitude is one of the reasons why.

When I was growing up many can confirm that I used to draw a lot. I was always drawing. Many sleepless nights just being engrossed in drawing some character, or some scene. The amount of time I spent was irrelevant. What was important, was the finished product and weather or not I was happy with it. As life took me into another direction, I became a graphic designer. Graphic designers operate by rules that are a bit different to fine artists or other creators. Because of the deadline oriented nature of the industry, quality sometimes has to take a back seat to speed. This is not to say that the quality of the work produced by graphic designers is of a lesser quality than others, but what I am saying is that graphic designers have to find a delicate balance between speed and quality and sometimes things lean towards the side of speed.

When my wife and I started working on Celflux I came to the realization that I had to break out of that graphic designer mentality and approach this project with an emphasis on quality. This is not to say deadlines were to be ignored, or to say that deadlines are not important, but they were not to take precedence over producing something of quality. The work on Celflux had to be the best that I could produce, because that’s one of the things people will remember it for. Sure the story needs to be engaging with strong character development, flowing story arcs and a captivating plot. But if the quality of the product is less than stellar, it will not have the impact that it needs to. I heard one person say it like this “The artwork is what grabs the reader, and the story is what keeps them.”

Again, I am not saying that speed is not important. Nor am I saying that it is impossible to create quality with speed. Nor am I trying to downplay the importance of meeting deadlines especially in the comic book industry. But that at this time, for Celflux, speed needs to take a back seat.

When we first started putting Celflux online, we were putting out two pages a week. Between my day job and other responsibilities it became a situation where I was just trying to get the pages finished and not really concentrating on achieving, or maintaining a particular type of quality. I eventually had to stop, take a step back and decide which was more important to me. To meet a self imposed deadline, or stay committed to the quality I was trying to achieve. While writing this blog post, I got an email from Tapastic (one of the platforms we used to put Celflux online) letting me know they missed me because we haven’t posted anything in a while. That aught to tell you what was the decision I made. Quality, is more important to me than speed. So I will slow it down, and focus on the quality. There are instances that even after I had completely finished a panel, if I was not happy with it, I did it over from scratch. In time, Celflux if it is good enough, will be recognized for it’s quality, and will come into it’s own.

The reality is that there are literally, thousands of extremely talented creators out there. Many, many, many of them far more talented than I will ever be. So if Celflux has any hope of being noticed on a Comic Book shelf or in the catalogue of an online digital comic store, it at least has to look like it belongs next to the already stellar stuff that is already out there. There’s a little experiment I did to put this to the test and I’d like to share it with you.

I went to the Comixology website, and I took a screenshot of their homepage. I then went into Photoshop, and placed the Celflux cover artwork alongside the titles there to see if it fit. Here’s how it looked. Judge for yourself. 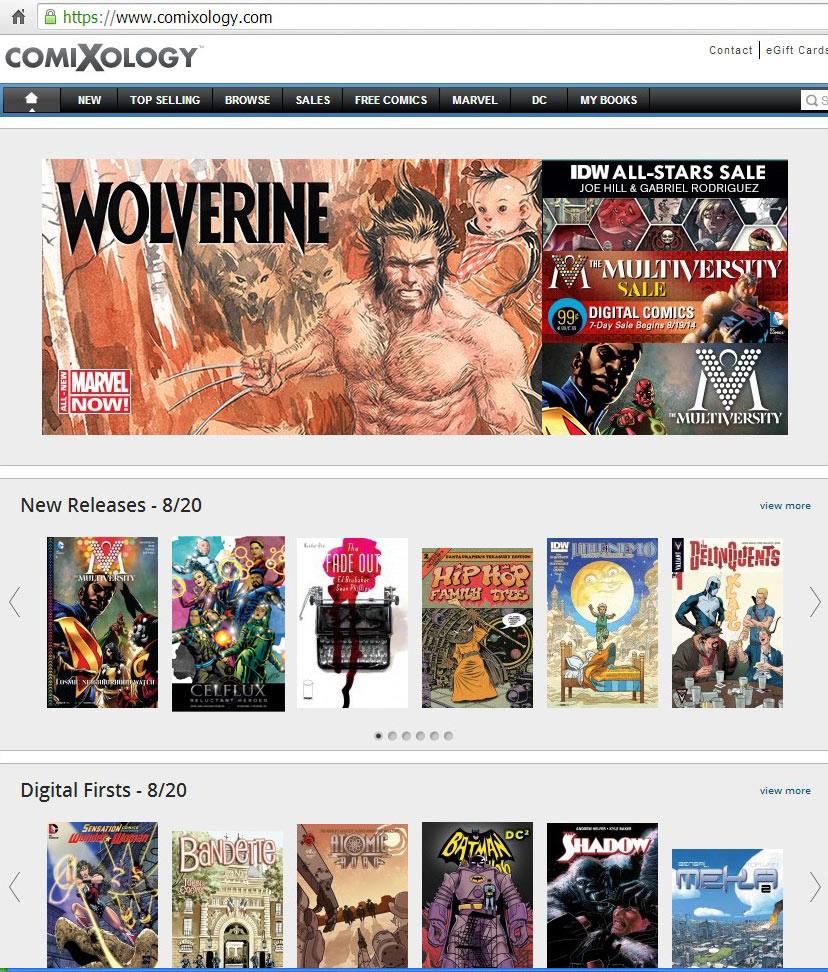 My desire, is that Celflux will look good enough to be alongside the great titles already there, but be unique enough that it would stand out. While I will always see room for improvement, I think Celflux looks pretty good there. The most I can do is hope that Celflux fans, other comic enthusiasts and the folks at Comixology, when the time comes, think the same.

So for the sake of achieving and maintaining a certain level of quality, at this time, some things need to be sacrificed. One of those things, is speed. In time as my skill improves my speed will also improve. For the time being, quality takes priority.

Food for thought. Till next time.