We’re kicking off a week-long event for our Celflux Book Launch (Google+) & (Facebook). During this week we’ll be sharing some content that we hope will make our readers get more connected with Celflux as we are. We hope that they will make Celflux a part of them, as it is a part of us.

We thought about it and decided that the best way to get people to be a part of your vision, is simply to share how you feel about it what inspired you to have this vision in the first place. So we’ve decided to go back to the very beginning, and tell the story of how it all got started. To do this we have to go back. Way, way back. Back to the days of a young boy who was introduced to, and fell in love with creativity.

I’ve told the story before of how I was scolded as a young boy for drawing in my school exercise books. Well I’ve never shared just what I was drawing in those books. It was mainly stuff I saw on Saturday morning cartoons, or what I saw in the comic strip of my newspaper. This week I’ll be sharing some of those.

One of the very first cartoons I was introduced to as a young child was The Herculoids. 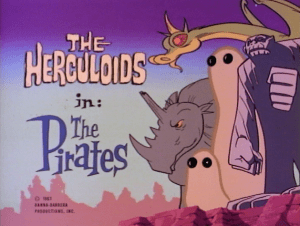 The Herculoids is an American Saturday-morning animated-cartoon television series, created and designed by Alex Toth, that was produced by Hanna-Barbera Productions.

“The Herculoids is an American Saturday-morning animated-cartoon television series, created and designed by Alex Toth, that was produced by Hanna-Barbera Productions. The show debuted on September 9, 1967 on CBS.[1] Hanna-Barbera produced one season for the original airing of the show, although the original 18 episodes were rerun during the 1968–69 television season, with The Herculoids ending its run on September 6, 1969.

Eleven new episodes were produced in 1981 as part of the Space Stars show. The plotlines are rooted in science fiction, and have story direction and content similar to Jonny Quest and Space Ghost. This series is set on the distant planet Amzot (renamed Quasar in the Space Stars episodes). The name “Amzot” was first mentioned in the Space Ghost episode “The Molten Monsters of Moltar” (in which the Herculoids made a brief guest appearance) and in the series proper in the “Time Creatures” episode.”

The characters of The Herculoids, were a seamless blend of primitive yet futuristic design.

As a child I was fascinated by this cartoon. Not just for the magical creatures and their abilities, but because of the fantasy world they lived in, the dangers they faced and how they overcame them through teamwork. Both the characters and the world they lived in was a seamless blend of primitive and futuristic. There were prehistoric like creatures with fantasy and futuristic abilities. They wore loincloths but used laser guns. Strange yes, but it all seemed to work. Also as a young boy you didn’t question the practicality of such things you just accepted it for its awesomeness. I had a group of friends at school who were also fans of the cartoon and each of us called the other by the name of one of the cartoons characters. I was Tundro. These were also some of the first characters that I began drawing as a young boy.

Here’s the opening credits to The Hurculoids. Seeing this brings back memories. Awesome stuff.

Also, here’s a short documentary taking a look at the creator and the inspiration for the show.

So this was one of the shows that kindled the spark of creativity in me and made me fall in love with sci-fi, fantasy and imagination.

We’ll be sharing more of early inspiration in the coming days. Till then, keep dreaming.