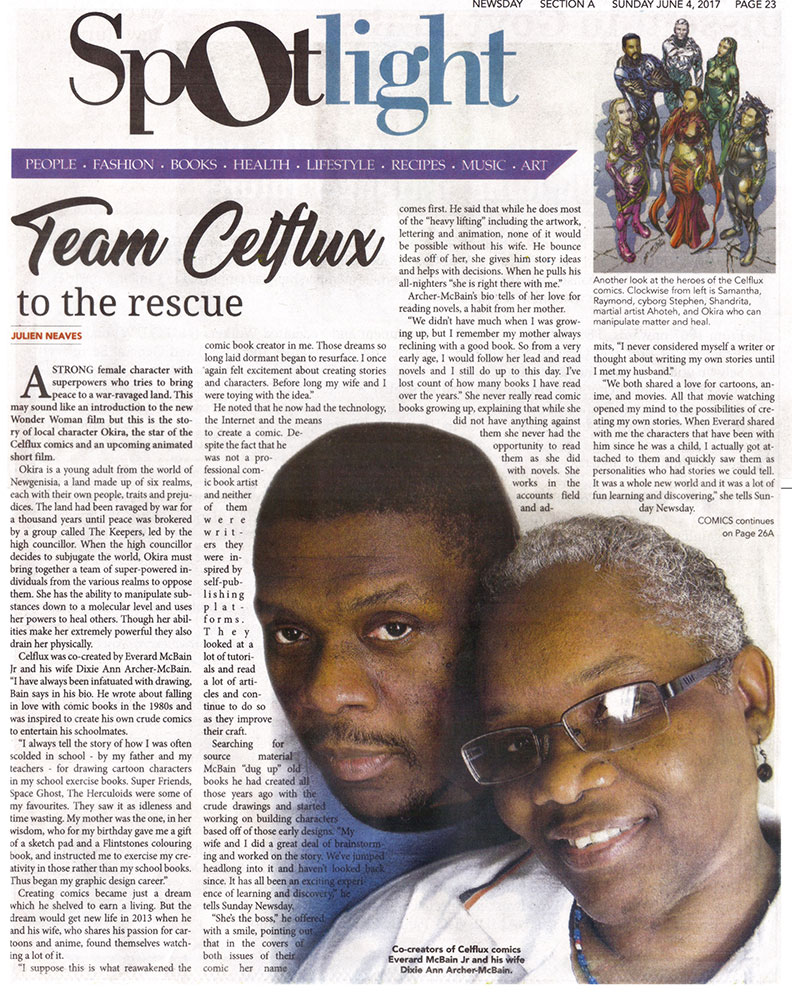 The following is an interview we did with Black Girl Nerds when we first launched Celflux. The original article can be found here:

How long have you been working in the comics industry?

Dixie Ann: We decided to start creating comics in September of 2013. We officially became part of the industry when our first book, Celflux Issue No.1, was published on October 30th, 2015.

Describe why you chose the industry and the path you took to get there (education, internships, etc.).

Dixie Ann: I’ve always loved reading novels. I got the habit from my mother. We didn’t have much when I was growing up, but I remember my mother always reclining with a good book. So from a very early age, I would follow her lead and read novels and I still do up to this day. I’ve lost count of how many books I have read over the years. I never really read comic books growing up. I had nothing against comics, I just never had the opportunity to read them as I did with novels. I enjoyed immersing myself in the words and visualizing the scenes in my mind. Enjoying the personalities and personal interaction of the characters in a story. Conflicts, resolutions, villains, protagonists all the good stuff.

I work in the field of accounts and I never considered myself a writer or thought about writing my own stories until I met my husband. We both shared a love for cartoons, anime, and movies. All that movie watching opened my mind to the possibilities of creating my own stories. When Everard shared with me the characters that have been with him since he was a child, I actually got attached to them and quickly saw them as personalities who had stories we could tell. It was a whole new world and it was a lot of fun learning and discovering.

Everard: As long as I can remember, I have always been infatuated with drawing. I always tell the story of how I was often scolded in school — and by my father and my teachers — for drawing cartoon characters in my school exercise books. Super Friends, Space Ghost, The Hurculoids were some of my favourites. They saw it as idleness and time wasting. My mother was the one, in her wisdom, who for my birthday gave me a gift of a sketch pad and a Flintstone’s colouring book, and instructed me to exercise my creativity in those rather than my school books. Thus began my Graphic Design Career. (True story).

In the 1980s, I fell in love with comic books. I collected many of them over the years and was fascinated not only by the fantastic artwork but the characters and stories that the images brought to life. One that comes to mind is ‘Strikeforce Morituri’ which was created by writer Peter B. Gillis and artist Brent Anderson. I was fascinated by the realism of the character’s even though they had special abilities. I thought to myself back then how cool it would be if I could create my own comic book with my own characters and my own story. I tried to do just that. I created some very crude drawings in lined exercise books. I had continuing issues and it seemed to entertain my schoolmates so that was cool.

In the imagination of a young boy, the possibilities were infinite and achievable. In reality, however, the dream of becoming a comic book artist from Trinidad and Tobago and making a living was just that — a dream. The means, technology, respect, and wherewithal were not available to the comic book artist back then. Comics were little more than a recreational pastime. It was not to be seriously considered as a profession. So the idea was in all practicality shelved and the priority of becoming a Graphic Designer to earn a living took the front burner.

In 2013 my wife, who shares my passion for cartoons and anime, and I found ourselves watching a lot of it. We would set aside a portion of every day to kick back and relax with a good anime series or movie. I suppose this is what reawakened the comic book creator in me. Those dreams so long laid dormant began to resurface. I once again felt excitement about creating stories and characters. Before long my wife and I were toying with the idea. Things were a lot different now than they were all those years ago. I now had the technology and the means. I mean, most of the tools I used as a graphic designer, I could use to create a comic. Oh, and now we had the internet.

We did a lot of research, and we realized that the comic book industry was something of a force to be reckoned with now. We saw the many talented creators as well as the various self-publishing platforms available for someone who created something and wanted to get it out there. So we knew that it was possible for us to do the same. Neither of were professional writers, and I was by no means a professional comic book artist. So we looked at a lot of tutorials and read a lot of articles. We still do, because there’s a lot of room for improvement.

So I dug up those old books that I had created all those years ago with the crude drawings (yes, I still had them) and started working on building characters based off of those early designs. My wife and I did a great deal of brainstorming and worked on the story. We’ve jumped headlong into it and haven’t looked back since. It has all been an exciting experience of learning and discovery. Thus Celflux: Reluctant Heroes was born.

What have been the highlights of your career/current job or project so far?

Dixie Ann: Just getting Celflux published was in and of itself a huge deal for us. We never thought that we could do it. It was a lifelong dream of Everard’s, but it became my dream also to see the book completed and made available so others could read the story. Another highlight was the response we’ve gotten to the book and, in particular, the main character Okira. We’ve been featured on a few well-known blogging websites, and the response has been great. Quite a few folks like Okira a lot and we’re hoping that number grows so she can become part of our pop and nerd culture.

What projects are you currently working on?

Everard: We’re currently working on Celflux issue no.3 and it’s carded for a late August release. When we did Celflux, we had no plans to work on any other books. However, we’ve since realized that we have quite a few stories to tell, and with the lessons learns from publishing Celflux, we’ve decided to do additional books. We have three other main titles in development that will be announced soon. But Celflux is our first priority.

Dixie Ann: Independent comics is hard work. We spend hours brainstorming and researching to come up with original ideas. I’ve seen Everard stay up late at night working on pages and character design. Then there’s the hard work of getting the word out. Building awareness about Celflux is one of the most difficult things to do. Social media does make people accessible, but that does not mean it’s easy. So it’s a lot of hard work. We really appreciate you guys at Black Girl Nerds, as well as the other sites who have featured us. Without you, no one would ever hear about Celflux.

You can see a lot of the artwork for Celflux on the website https://celflux.com. You can also read issue no.1 and 2 for free by registering. You can see more of Everard’s artwork on his DeviantArt page. http://gemgfx.deviantart.com

Since this series does revolve around comics, can you list your Top 5 favourite comic books of all time?

Everard: Strikeforce Morituri, published by Marvel Comics from 1986 to 1989, created by writer Peter B. Gillis and artist Brent Anderson,  is by far the comic that has most influenced me. I loved everything about that book. It was the first comic book I started collecting.

Justice (John Roger Tensen) published under New Universe, an imprint of Marvel Comics, published from 1986 to 1989. The second book I started collecting.

Spawn. A big influence on me. Not just the character and the story, but the story behind the story. That is the story of how Todd McFarlane was part of the exodus from Marvel and DC that started Image Comics. This guy taught me that I could create my own characters. I like the Spawn Origins series pencilled by Greg Capullo.

X-Men was also a huge influence. I got issue no.1 a very long time ago and fell in love with the characters. I still love them up to this day.

The West Coast Avengers, published September 1984, created by Roger Stern and Bob Hall. I used to read these a lot, and they also had an influence on me as a comic creator.

Dixie Ann: Don’t get into making comics unless it’s something you love. Don’t do it for money. Don’t do it for fame. Do it because you love it. Do it because you love comics and you want to tell stories. If you do it for the money, you’ll be seriously disappointed. There are many other talented creators out there doing exactly what you are doing and who are also trying to make it big. The reality is, unless you are lucky and become and an overnight sensation, you more than likely will be at it for years before anyone even knows your name. So let your motivation be your love for what you are doing. That will sustain you.

Are you attending any events or participating in any panels in Spring/Summer 2016?

Everard: No we’ve got no plans at this time. We’re based in Trinidad and Tobago so our options are limited in that respect.

Our books are available on Amazon, Drive Thru Comics, Comixology and Barns and Noble in print, pdf and Kindle formats. The print options are print on demand and the price is a bit steep. We’re currently working towards getting our books into comic book shops at a more affordable price. So if folks would like to see Celflux in comic book shops, please feel free to ask your shop owner for the book That will help us a lot.  We also want to thank all the people who have liked, shared, talked about, reviewed, mentioned, commented on, or helped get the word out about Celflux in any way. We want to thank the people who have encouraged us with their words of support that helps us continue to do what we’re doing. We couldn’t do it without you guys. Thank you to Black Girl Nerds also for this feature. Thank you so much.