Our recently released animated trailer has risen to 13K views on Facebook. This is more than I ever thought possible when I was making it. Because of that response and some really positive feedback from our fans, we have decided to embark upon an even more ambitious journey. We’ll be making a Celflux animated short film. 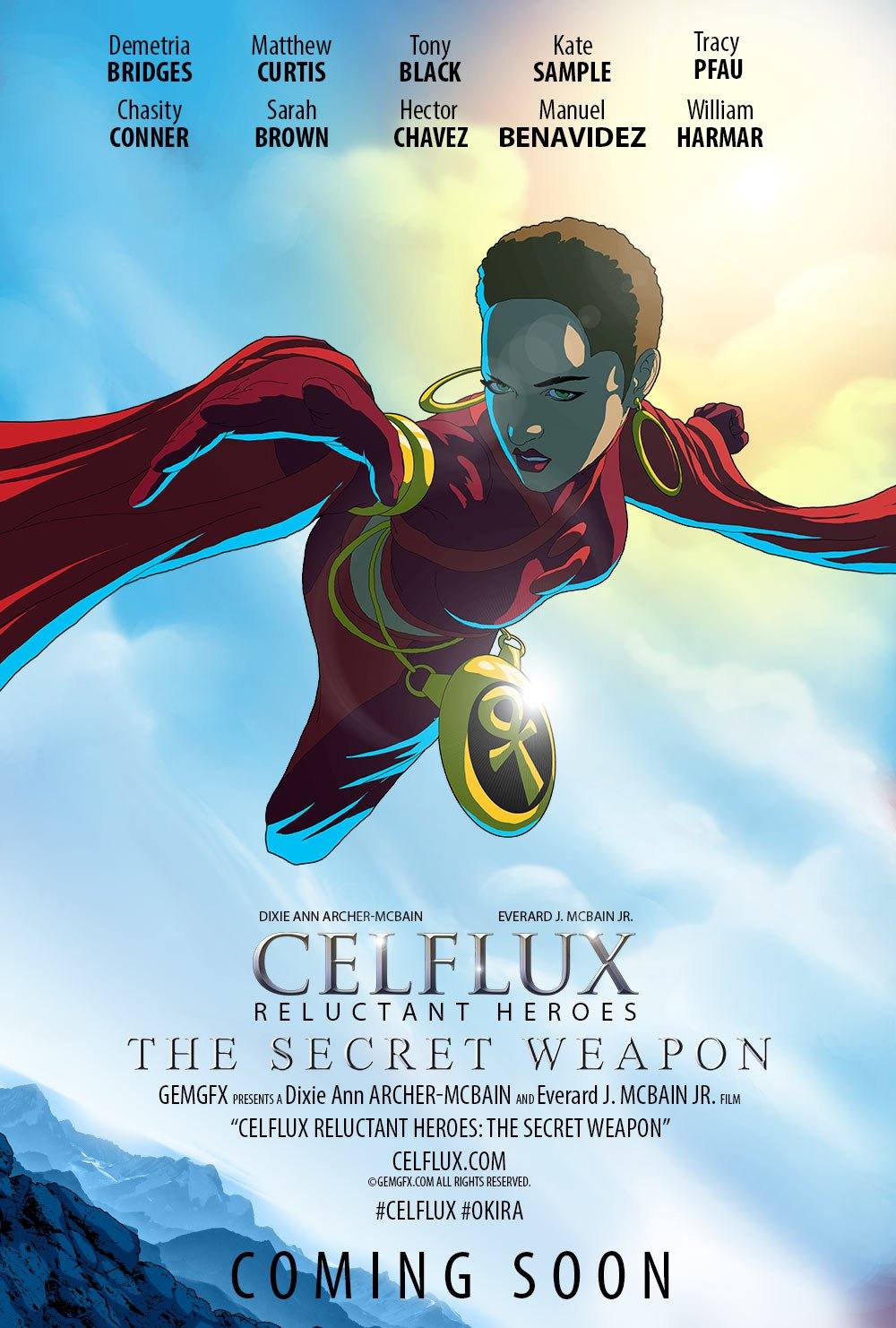 As I’ve said on more than one occasion, I’m a child of the 80s and my early Saturday morning cartoon addiction was the inspiration for me spending nine months creating the Celflux animated trailer. You can have a look at the trailer:

I had to learn most of it from scratch and there was a learning curve. Through it all, I’ve learned a lot and we received som really good feedback. So Dixie Ann and I were talking about the possibility of us doing an animated short. Was it possible? Could I do it? It would be a lot of work. But I thought to myself it wasn’t necessarily about my ability but more about “What have I got to loose?” So as is our custom we began to do our research. We also had to decide if we were going to do a short with voices for the characters. I did everything for the trailer. But I couldn’t do voices. We decided that we had to have voices. But who would want to be a part of this little project? So we took a leap of faith and sent out requests. To our surprise, we were inundated with auditions of extremely talented individuals who wanted to portray the characters of Celflux. So much so, that it was really difficult to choose the voices because of so much talent.

What helped us decide was not how well someone could deliver a line, because as we said all the auditions were awesome. No, the deciding factor was if the individual could capture the spirit that we had in mind for the character. This was really important to us because the voices had to be believable. So today we are happy to introduce you to the talented voice artists who will be lending their awesome talent to bring the characters of Celflux to life. We want to say a huge thank you to each and every one of these individuals who not only have committed their time to help us, but they have really expressed a confidence in the project that really encouraged us. We encourage everyone to show these guys all the love and support possible. 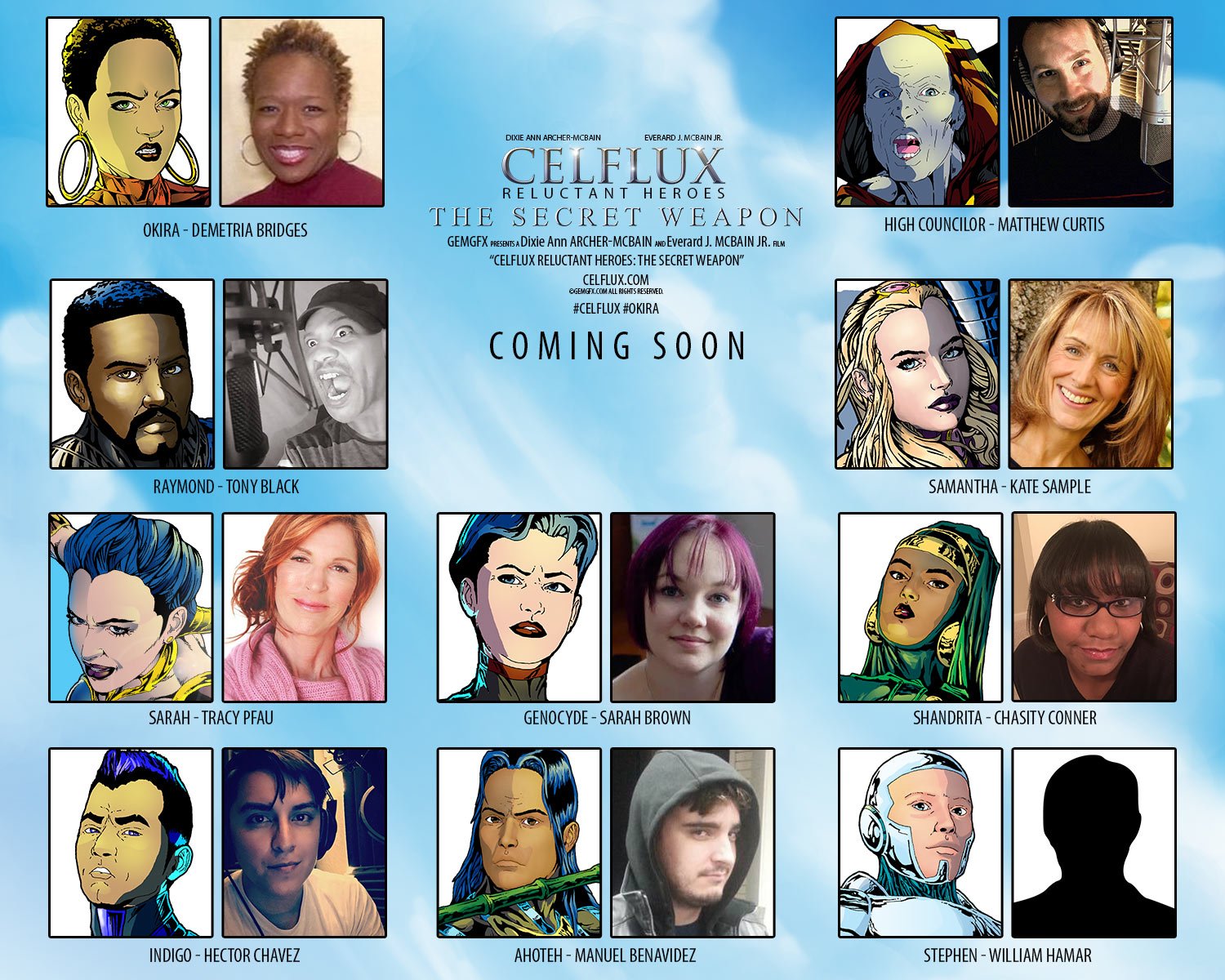 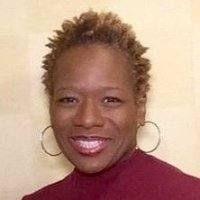 Demetria Bridges – Okira: Her tagline is “The voice with the velvet touch.” Believe me, when I tell you, that’s a perfect description. Demetria has accepted the awesome task of being the voice of our leading lady Okira. She is an extremely talented and experienced voice actor with a long and impressive resume. She is also a fan of 80s cartoons. We are very lucky to have her as part of this project. You can find out more about her work and connect with her via her
Website: www.demetriabridges.com
LinkedIn page: www.linkedin.com/in/demetriabridges 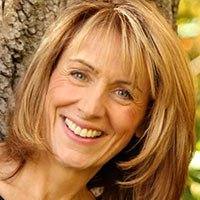 Kate Sample – Samantha: You would remember Kate as the voice at the beginning of the trailer. She did a really good job for us and was excited to learn that we wanted to do a short. She is also highly talented and a really cool individual. It means a lot to us to have her on board. Visit her links to show her some love and support.
Website: www.BostonBritVoice.com
Voices 123: http://voice123.com/katesample
Facebook: https://www.facebook.com/Kate-Sample-BostonBrit-Voice-1488146798064029/ 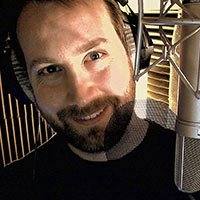 Matt Curtis – High Councilor: When we heard Matt’s audition for the High Councilor, we were immediately sold. The guy is a vocal wizard. If someone can make you see facial expressions by just hearing their voice, that person is talented. He also has a long and impressive resume and a lot of experience doing character voices. To have him as part of the Cleflux project is invaluable. You can connect with him at these links:
Website: www.MicTheMatt.com
Facebook: https://www.facebook.com/MictheMatt/
Twitter: https://twitter.com/MictheMatt 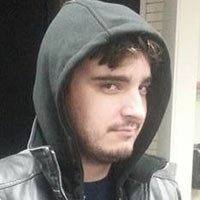 Manuel Benavidez – Ahoteh: Manuel describes himself as a newbie to voice acting. Well, we couldn’t tell. Because his audition was exactly what we had in mind for Ahoteh. Ahoteh is one of the main characters of Celflux and we needed someone to properly deliever him. The intensity and spirit were perfect so we immediately let him know that. He’s also shown us a great deal of encouragement and is really excited about the project. We are excited to have him as well. You can reach out to him on his Facebook page: https://www.facebook.com/manuel.benavidez.9 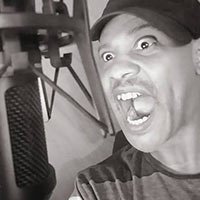 Tony Black – Raymond: We’ve always pictured Raymond played by Michael Jai White in a live action version of Celflux. So for the animation, we said we wanted a voice “similar” to Michael Jai White. When Tony sent his audition, we thought the real Michael Jai White was auditioning for the part. The guy did a perfect impression. We are really lucky to have this guy as part of the project. We have no doubt that Raymond will become one of the most memorable characters of Celflux because of Tony’s portrayal. You can check out his many other impressions and extensive demo talent via his Soundcloud page: https://soundcloud.com/user-69124635 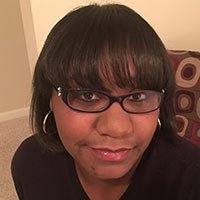 Chasity Conner – Shandrita: How can you demonstrate an introverted person using a voice? That’s what we had in mind as Shandrita’s personality. Chasity was able to capture that. She has extensive experience doing voices for anime and said Celflux was a project she really liked the first time she saw it. She, like the other voice actors, is very talented. We are really blessed to have her on board. You can check out her work via her Social Links:
Youtube: https://www.youtube.com/c/CeeCeeVA
Facebook: https://www.facebook.com/ceeceeva/
Tumblr: https://www.tumblr.com/blog/ceeceeva
Twitter: https://twitter.com/CeeCeeVA

William Harmar – Stephen: William has a strong English narrator’s voice. His YouTube channel has some really powerful readings of short stories that reminded us of those radio dramas that we used to listen to long ago. The guy is a vocal performer. To play Stephen would be a walk in the park for him, in our opinion. He sounds like he belongs on Broadway. The guy is that good. His audition for Stephen sold us immediately. We still can’t believe he is on board. You can check him out on YouTube at https://www.youtube.com/user/GentlemanWalrus 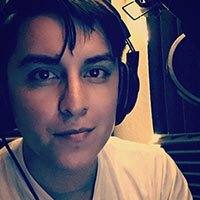 Hector Chavez – Indigo: Versatile. That’s the word that comes to mind in listening to the work done by Hector. We needed a crazy, unhinged portrayal for Indigo. We wanted it believable. Hector delivered it spot on. His YouTube channel shows his wide range of work. His talent speaks for itself and we really appreciate the fact that he is part of this project. Follow him on Facebook: www.facebook.com/HectorChavezVO
Or YouTube: https://www.youtube.com/channel/UCdmAyESqajZTY37-sRFXB6Q 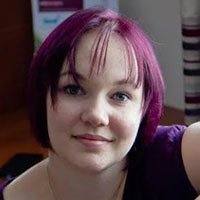 Sarah Brown – Genocyde: The interesting thing about Sarah’s audition, is we weren’t sold at her portrayal of Gencyde, but on her introduction of the audition. She started out by saying. “Hello my name is Sarah Brown and I’ll be auditioning for the role of Genocyde”. The way she spoke saying that, sounded like Genocyde to us and it was enough for us. But even more than that, she captured Genocyde’s rage perfectly. In our minds, we saw Genocyde’s rant while we listened to her voice. It was perfect. As with the other talents, we cannot believe how lucky we are to have her as part of the project. Follow her on Twitter: https://twitter.com/Synaes 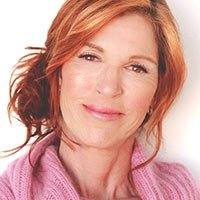 Tracy Pfau – Sarah: So we’ve saved Tracy for last. But believe me when I tell you she is by no means the least. Tracy is not just a voice actor, but an accomplished movie and TV actor. As her IMDB page will tell you, (yeah, she has an IMDB page) she’s had roles in Touched by an Angel, Vampire Diaries, Chuck, Married with Children and Dragnet to name a few. To say her resume is extensive is a drastic understatement. She is an excellent actor. We still are in disbelief that she sent us an audition and wanted to be a part of the project. You can check out her work at her website http://www.tracypfau.com/ and on IMDB. http://www.imdb.com/name/nm0679336/

So here you have it. The amazing voice cast of our Celflux animated short film. It will be titled “The Secret Weapon”. So here’s the thing. With this level of talent being on board, I’m challenged to bring my work up to the level that will be worthy of this kind of talent. As with the trailer, I’ll be doing everything myself. Yes, all of it. I have my work cut out for me. But I’m excited about it because not only is the team talented, they seem to really believe in Celflux and that’s a huge, huge encouragement to me.

We won’t be doing any form of crowdfunding for the Celflux Animated Short. The only support we’re asking of our fans, is to help us spread the word. Share the news with your friends using the hashtag #CelfluxFilm. So stay tuned for updates as we begin this journey, and we look forward to creating something we hope fans can watch and enjoy.